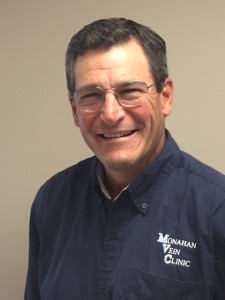 Daniel L. Monahan, M.D. opened Vein Surgery and Treatment Center of Northern California in 2001. The name changed to Monahan Vein Clinic in 2011.  He is board-certified in surgery and a fellow of the American College of Surgeons.  Treating vein disease is not something to learn in a weekend course. Dr. Monahan’s formal training included more experience in vein treatment than typical surgical training, and he carried this expertise into his practice.

His involvement in societies dedicated to research and education about vein disease means that he utilizes state-of-the-art techniques in vein care. Dr. Monahan is a member of the American Venous Forum and the American College of Phlebology. Dr.Monahan was born in Honolulu, Hawaii. On his mother’s side, he is a seventh-generation descendant of the first missionary physician to Hawaii. On his father’s side he is a seventh-generation northern Californian. He graduated from the University of California at Davis in 1976. Returning to his home in Hawaii, he attended medical school at the University of Hawaii. Post-graduate training took him to the Cleveland Clinic, and then to Virginia Mason Clinic in Seattle, Washington, where he completed his general surgery residency in 1987.

Dr. Monahan first went into private practice in general surgery in Los Altos, California. Later, he moved to join a practice in Auburn, California. Greater exposure to expertise in the treatment of vein disease during his training prepared him to include this service for both health and cosmetic concerns within his general surgery practice. With new technological developments in diagnosis and treatment of vein disease, treating varicose veins became increasingly sophisticated. A few physicians came to believe that treating vein disorders warranted time and intensity of focus as a separate specialty. In 2001 Dr. Monahan opened the Vein Surgery and Treatment Center, now Monahan Vein Clinic, in Roseville, California to provide that service, and shortly thereafter discontinued his practice of general surgery to devote all of his time to treating vein disease.

Though Dr. Monahan did not enter surgical practice with aspirations in research, he found himself at the leading edge of a rapidly changing field. New technologies and new procedures have led to new concepts of the natural history of vein disease and new treatment strategies. Dr. Monahan has done clinical research looking into the best way to treat varicose veins. He published the results of a study in the Journal of Vascular Surgery that challenged a century-old dogma of vein treatment. Many vein experts have now accepted this concept and the implications it has for changing vein treatment strategies. Physicians from the United States and abroad have visited his practice to learn vein treatment techniques. Dr. Monahan and his wife, Lyn, have been married since 1976. They have two grown children, Malia and Paul. Dr. Monahan is active in his church and community. He teaches Sunday school classes for adults, and has volunteered for the YoungLife Ministries in his area. He is a passionate golfer and fly-fisherman.